This is news footage published by KGun9 some time ago. Don Holsten, our Construction Manager, was in the news with one of his plumbers to show how a cold spell can spell out disaster for home owners. 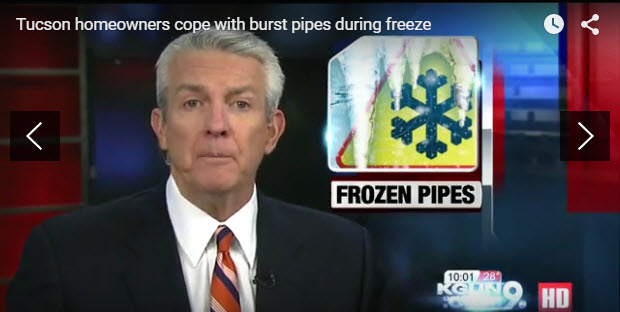 TUCSON (KGUN9-TV) – As the cold spell continues in Tucson, homeowners are dealing with all types of issues related to the cold weather.

Ken Baarson is just one of many homeowners who returned home to burst pipes.

On Sunday, when he and his wife returned from church they found their home covered in nearly an inch of water from a pipe that had burst in their bedroom.

But he isn’t alone — Donald Holsten, construction manager with Pioneer Plumbing says in the last few days they’ve gotten dozens of calls just like this.
“We’ve been seeing a great increase on pipes busting, problems that customers are having with their plumbing systems here in town, a dramatic increase actually,” he said.

A few miles away, Kay, another homeowner was also dealing with the affects of the cold spell, her water pipe located outside her house also burst, and partially flooded her yard.

A problem, Cassius Zimmerman, a plumber with Pioneer Plumbing says is pretty common.  “We’re not expecting to get this cold, so when it does it’s a relative shock and people don’t know how to handle and to prevent it,” he said.